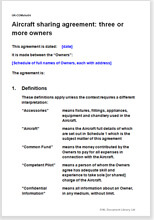 Comprehensive agreement to regulate the fractional (shared) ownership of an aircraft between three or more parties.
About
Preview
Why from us
Ask a question

This agreement covers any situation where three or more people or sets of people share ownership and use of an aircraft for leisure or business.  The agreement has been drawn to as to regulate occupation where only one owner uses the aircraft at any one time.  However, there is nothing to prevent a second owner sharing time with another owner.

First, you should consider what is the most suitable structure for your sharing proposal.  If you are looking at a commercial arrangement or one for more than ten people, then it would be better to hold the property in a limited company and buy and sell shares in it.  Then ownership of the property itself never changes. No stamp duty is paid once it is bought as the right of occupation can be treated as a licence.

However, running a company does cost money, so between 2 and 10 owners it is a matter of preference as to whether you want the formality, expense and greater certainty of a company structure and shareholders agreement or the lower cost and comparative informality of an agreement like one of these.

We offer two versions here. This version is designed for more than two parties. One is for a situation where only two parties share - two individuals or two families, or whatever. Aircraft share agreement: two owners.

Even if ownership of your aircraft is registered with some organisation, the particulars will not record the shares in which the aircraft is held.  So If you own 60% and I own 40% we have to record that in some other document.  If we do not do so, “the Law” will assume we own in the shares in which we contributed to the purchase price.  This may or may not be the same thing.  These Net Lawman agreements specifically record the shares.  They also record shares which may be owned by someone who is not a registered owner. Such an interest is called a beneficial interest.